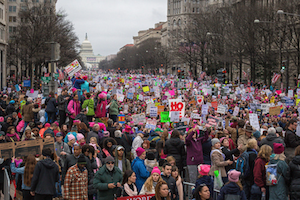 The highlight of my elementary school field trip to DC was not the Air & Space Museum or Dorothy’s shoes; it was the Woolworth’s lunch counter from Greensboro, it 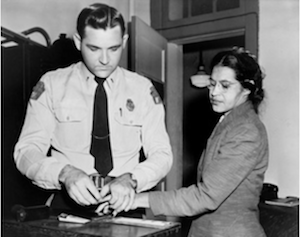 was the Lincoln Memorial, it was Thurgood Marshall’s resting spot at Arlington National Cemetery. I chose to research Rosa Parks in fifth grade. I chose to research the Montgomery Bus Boycott in seventh grade for an independent project and again in high school for a long-form essay for a History Day Competition. I won and went all the way to States with that essay.

My all-time favorite undergraduate class was my Social Movements class at F&M with the fantastic Professor Noakes (yeah, the guy in the first paragraph). I learned so much about protests, people’s passions, and the change that can come from organizing around a common cause even when it seems as though every force in the universe is working against you. My passion for these topics eventually carried over to my teaching; I taught middle schoolers and high schoolers about the Resistance during World War II, the Underground Railroad, the Bus Boycott, and so many other important movements that have shaped our world.

When I was younger, I wished I could have joined the Freedom Marches. I was convinced that I would have, had I been alive at that time. I mean, who wouldn’t want to march for equal rights and social justice? Turns out, that answer is me.

But, I declined all four invitations I had to go to DC. We have two young sons, and I knew I couldn’t take them with me for a million and one reasons. I knew that I’d have work to do. I knew that losing those hours would equate to a tougher time paying our mortgage and other bills. This is our reality now that both my husband and I chose to be self-employed… Turns out, I would have lost the money we needed to pay an emergency heating bill had I not been here working Saturday. It was a good decision to stay home.

But, it wasn’t. Because when it comes right down to it, those weren’t the only reasons I didn’t go. I didn’t march on Washington because I was afraid. I was afraid of potential violence. I am thrilled that there wasn’t any. (FACT: The violent protests that happened Friday were not in any way associated with the Women’s March. FACT: There was not one arrest during the Women’s March. Not one.)

It’s a hell of a thing to admit these things. Just reading it makes it sound like weak excuses from a privileged white woman who has never had to face the injustices and hardships others have faced their whole lives. I am well aware that on January 20, those injustices and hardships became even more real for millions of Americans. And today, after just four days in office, gag orders have been put in place on various government agencies, the ACA and CHIP and Medicaid are on the chopping block (this affects all four members of my immediate family), our environment is at risk with the executive order to pursue the XL Pipeline, Native Americans’ rights are at risk with the same executive order… I should have marched for all of us, and I don’t know that I’ll ever completely forgive myself for not doing so.

A fellow snowflake has a birthday today. And, she challenged all of her friends to overcome fear to make ourselves better on HER day. I wish I had confronted my fear and marched with her in person, rather than just in spirit. I’m done being afraid of what other people will think and say about my beliefs and convictions; let the chips fall where they may. I will use my First Amendment Right as long as I still have one. This post is the first step of my march.

Love you, B! I’m indebted to you and everyone else who didn’t let anything stop you from marching. Thanks for giving me the push I needed to “untether my soul” – you’ve given me quite the gift on your birthday.

Images via Flickr by U.S. Embassy The Hague and Mobilus in Mobili

Life Under the Ponytail Pages